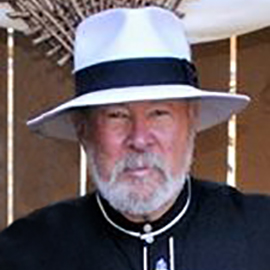 Create an account to apply for a loan today

Sam has years of experience in analyzing a situation and then finding the best solution.

Energetic and enterprising by nature, Sam previously worked 29 years at Pac Bell in many different jobs, retiring as a business manager in 1996. He is extremely involved in the local community through many organizations including the Arroyo Grande Chamber of Commerce, SLO Sportsman’s Association, South County Historical Society, Arroyo Grande Police Advisory Council, Arroyo Grande Police Volunteers, the California Law Enforcement Historical Society, and SLOLEAF (San Luis Obispo Law Enforcement Assistance Foundation). He is also a Charter Member of the Friends of the Five Cities Fire Authority. He is on the Board of Directors of the Arroyo Grande Harvest Festival.

At a time when others might have relaxed from their accomplishments, Sam continued on and received his Bachelor of Science degree from the University of Redlands.

He enjoys Cowboy Action Shooting as one of his primary hobbies and is a true champion, having won just about every major “Old West Shooting Event.” In his 25 years of competition, Sam garnered 12 State Championships (California 10 times, once for Mississippi, once for Hawaii), the Western Regional Championship 8 times, the Western States Championship, and the National Championship in 2004. Sam Holds 3 World Shooting Records and won a Gold Medal in Shooting at the Pan-Pacific Games. He also achieved the highest of all by winning the Indoor and Outdoor World Championships in 2006! Sam is also the co-founder of Chorro Valley Regulators, the local Cowboy Action Shooting Club.

Sam has recently taken up knife and tomahawk throwing. If it has a point, Sam will try and throw it. Sam is a member of the International Knife Thrower’s Hall of Fame. He always excels at whatever he takes up.

Sam Cotton has been a premier mortgage advisor at The Mortgage House for over 20 years. He is a consistent recipient of The Mortgage House's “Circle of Excellence” award, most recently earning the designation in 2021. He has the experience and the attention to detail that makes every client know they are dealing with the best!

Select the edit icon to edit your custom html

I met Sam Cotton through my real estate agent. When I asked her if I would be able to afford to buy a house in the area I was interested in she said I need to work with Sam. I am certain that I am in the home I’m in today because of Sam’s (tireless) efforts on my behalf. In this market, you need an advocate. Someone who is on your side and will work for you to help you get approved for the property you are looking to purchase.

My case was particularly difficult. I won’t go into the details here but there were many hurdles that were tossed in our path and at each and every obstacle, Sam handled each with the same determination and dedication that would ultimately lead to the signing of my loan documents. He’s like the “Terminator” of the loan world. He doesn’t quit until he acquires the target and terminates the opposition. (Sorry about the gratuitous movie reference… it seemed appropriate)